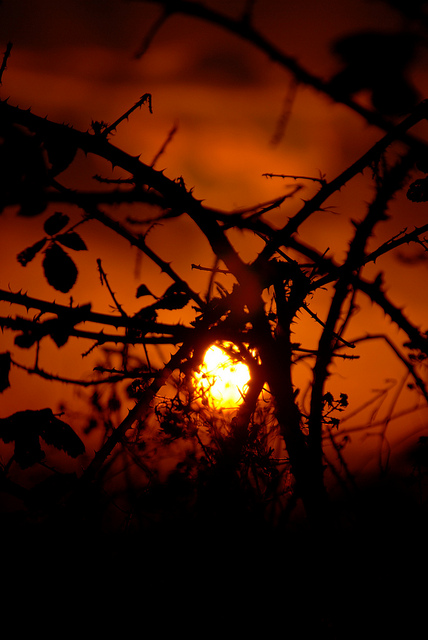 I found myself hung up in the tall weeds yesterday. The path, so clear when I started, turned into a tangle of twisted, thorny, vines. Struggle as I might, I could not make any headway. I would just shake off the ones holding my legs and others would grab may arms; free my arms and something snagged my waist. The harder I pushed the more frustrated I became. Then, when things seemed to have gotten about as bad as they were going to get, it started raining. For long time I pushed on, making very little headway, trying to find a path to the left or to the right that offered a way forward. In the end, I simply had to go back to the point from which I started down this death march and admit I had failed.

What I just described was not some nature hike or adventure trail gone wrong. It was in fact just a training session on our Lipizzaner, Jupiter, and we were working in a perfectly manicured arena. The tangles I refer to so colorfully in the previous paragraph existed only in my mind, but their effect was no less than if they had been real. However, in one way my allegory above is seriously lacking; it fails to include the fact that all the while I was struggling, Jupiter was struggling as much or more, and all of it was my fault.

I had set up some Working Equitation elements I knew I need to work on with several of our horses, if I ever wanted to compete in this activity at a level I would be satisfied with. While the training I have given the ‘Warhorses’ has proven quite adequate for the Medieval Gaming competitions we take part in, Working Equitation requires a different and in several ways, more advanced level of training. To wit, I decided to work Jupiter on collected cantering on small circles and lead changes. What happened instead was, I found I couldn’t even get him to take his left lead reliably from a simple canter depart, nor could I get him to relax and bend while cantering. Needless to say, our ‘small’ circles were not and collection was impossible.

What went wrong? Jupiter has become one of my favorite horses to ride and in the last several months has made great strides forward as a warhorse, so obviously he should be able to handle a simple figure eight at the canter, in 15′ circles, right? Had I prepared him for this with months of collected cantering on larger circles? Well no, not as such. Had I helped him learn to elevate his shoulders and bring his hind under to lift himself? Sure, on a straight or gradual curves. Was he remotely ready to accomplish my goals? Did I set him up to succeed? Perhaps not, but he has been doing so well lately I just assumed… What an idiot. What I did manage to do was make him so tense that he couldn’t even accomplish things he does well.

Now I was not abusive; I was not rough on him; I did not hurt him. His discomfort was all in my frustration with him, which he is well aware of and being a sensitive creature, he is upset by this. But that, in and of itself, was inexcusable; I know better than that. How can I call myself a classical trainer if I allow myself to fall victim to the main obstacles to good horsemanship; Excess Ambition, Expectation, Frustration, Embarrassment and Tunnel Vision. There are a couple rays of sunshine about this experience; Jupiter handled it, for the greatest part, with aplomb, and I can see now what I did wrong. In the earlier days of my riding I would have blamed it all on the horse and accused him of simply misbehaving, usually phrased as “HE had a bad day.” In fact I did say that on Facebook when I got home yesterday but a few minutes later revised to “WE had a bad day.” Upon reflection at 3:00am this morning I am now revising it again, “I had a bad day.” Not a terrible day, but bad.

So how should I have handled yesterday? How does one get out of the brambles once one has found themselves there? Stop trying to move forward; stop even trying to turn left or right; just stop. Trace your steps all the way back out of the mess you have gotten yourself into. Then, look honestly at where you’re trying to go and decide how much further back you still have to go to have any chance of finding the right path. Will this delay your journey? Probably not when you think how far you were able to go on this path before you were stopped cold. A quote from J.R.R. Tolkien’s Lord of the Rings sums it up well, “Shortcuts make for long delays.”  When you find yourself in the long weeds, stop, go back, and look for a better path.

For Jupiter and me, this means returning to flexibility and suppleness work and collection conditioning. It will take as long as it takes and if he is not ready to perform at the level I would like by the time we find ourselves on the Working Equitation course, then I will just have to accept that.

Yes, our training time with our horses is finite, but pushing thing too fast robs us of the experience of the partnership. So which is more important: the destination, or the journey?