A reader of my articles asked if I would address a problem with which she has had a lot of firsthand experience. She owns a Frisian/Draft cross and this mare, despite being a gentle, sweet giant, is often faced with fear by those who interact with her simply because of her size.

The fact is we are not capable of physically pushing or pulling even small horses effectively. We can, however, make use of their evolved nature as a prey animal along with the selective breeding humans have employed over a few millennia to domesticate the horse, to emotionally dominate horses through physical force. Taken to extremes this is no longer training and is in fact abuse. I personally find it more than just a bit cowardly of humans to terrify and hurt an animal that we have breed to not fight back, believing ourselves safe from retaliation. Indeed it is very lucky for us the vast majority of horses will not defend themselves from human aggression, even when it becomes extreme; if they did, humans would be killed by horses regularly and we would probably treat them much the same we do ‘pit bull looking’ dogs. However, I digress. 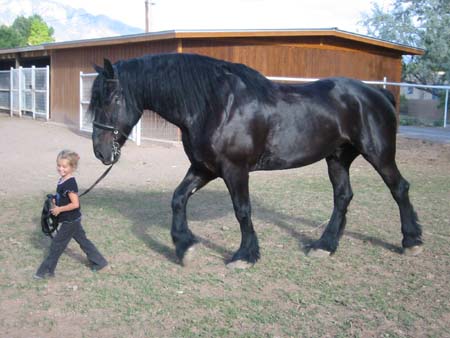 But why do we feel we need to use force at all? Not just in handling horses but in all aspects of horse training. Why do we default to that option so often? To answer this, I must give a bit of information about the joint history of Man and Horse.

Historically there have always been those who felt a need to dominate and control horses with force. For some it was expediency, for others tradition, for still others horses were just viewed as deserving no better treatment than food livestock, but I believe the real cause to be ignorance. Simply put, force is substituted where knowledge is lacking.

For a large part of recorded history horse ownership was the prerogative of an elite class. For the Greeks, horses were a gift from the gods and only the best families, i.e., richest, could own them. In Roman times this class was called Equis, which evolved into the Knights of the middle ages. In Japan the ruling Samurai class begin as mounted archers, etc. But it was not simply the fact that they had money enough to afford horse, it was that they had the free time in their lives to make a proper study of them.

Up until the 17th century horsemanship was a standard part of the education of the aristocracy and it was taught by masters in every school of higher learning. With the end of the classical period, the rise of the Middle Class and decline of the Upper Classes, due to little things like the American and French revolutions, these schools and the formal education they provided all but vanished. Add to this the departure from the battlefield of the mounted soldiery and therefore disappearance of the military training academies that maintained the traditions that allowed for the training of warhorse and their riders.

Horses however, did not vanish, so while the ancient knowledge of horsemanship, passed down for centuries, was not available, horses were still in desperate need around the world. This was especially true in the ‘younger’ nations of the ‘New World’ in North America and Australia. In these days conditions for horses and their riders were harsh and not conducive to the measured training of the ‘Old World’. The process needed to be abbreviated and horse training became a vocation and less ‘artful’.

“I didn’t sign on for a history lesson, what does this have to do with the subject at hand?” You might well ask, but hey, I am a follower of the concepts of ‘classical’ horsemanship, you should have expected a fair bit of history would be part of it.

The point is, without access to the knowledge of the old masters, the ‘New World’ had to invent its own ways of training horses, making them usable for the needs of the times, as quickly as possible and often employing a fair degree of force. These methods were handed down from generation to generation and eventually became a tradition of their own. A tradition still cherished and defended by some riders today. So cherished in fact, that they made their way into popular entertainment and for many are seen as not only traditional but are in fact considered best practices.

Fast forward to only a few years ago when something called ‘Natural Horsemanship’ finds a foothold among the modern horse owner who does not think of their horse as a tool of a trade or even transportation, but as a companion and beloved pet. For this recreational horse owner the precepts put forward by the best practitioners of this revolutionary concept of training are irresistible; namely gentle, gradual, measured training that eschews the harsher methods of the past in favor of apparently new, more humane methods, becomes a huge draw. But here is what I find most amusing, do you know what the Masters of ‘Classical’ horsemanship, dating back to Xenophon in 400 BC, would have called this gentler take on ‘Natural’ horsemanship? They would have simply called it ‘Horsemanship’. The concepts of working within the nature of the horse, with as little force as possible, and taking the time required to form a trusting partnership are not new ideas in the horse training world and throughout history those who were lucky enough to have access to the works of the classical masters always knew this. Now obviously not all practitioners of ‘Natural Horsemanship’ are create equal, and some are no less harsh than the methods used before the phrase “Natural Horsemanship” was ever coined, so don’t think I am saying that someone who refers to themselves as ‘Natural Horsemanship Expert’ is really just a modern version of a Classical Master. Unfortunately, this is far from the truth.

So this brings us, in a massively circuitous route, back to the original problem of people handling horses, especially very large horses, unnecessarily roughly.  Some do this because all they know about horses is what they have seen in TV westerns; some because what instruction they have been giving came from someone who holds to a traditional way of handling horses that employs more force as a matter of course. In both cases, when faced by a horse of far greater size than they are experienced with, they are intimidated and over compensate with even more force. Ironically, this is exactly the way one turns the encounter into a fight, a fight the human is simply outmatched in and it is completely unnecessary.

The short answer to this problem is this; treat all horses gently but firmly, but with only as much force as is absolutely required at any given moment and when more force is called for, return to the level you started with as soon as possible. Make it a part of your regular interaction with horses to ask them to do your bidding and reward their acquiescence with praise, instead of trying to force them. Do not allow the situation to escalate, with you raising and maintaining the higher level of force, thus forcing the horse to defend itself as it has evolved to do. e.g. Horse pulls, you yank on the rope and keep yanking, horse pulls back harder to get away from the threat. So you start light, increase only as much as is called for by the moment, then return to light and never assume just because the horse is bigger than other horses that you must raise the level on the force from the outset.  Remember that those who train with force must always use force and therefore have a limited number of tools with which to work. Those who forgo the use of force as much as possible have a much wider array of options at their disposal.

In conclusion, I am going to repeat the section on leading the horse from my previous article on ground work to give more details about what I am advocating here. You will note I do not at any point say anything about changing the method for a horse of unusual size. From mini to draft horse, if what we are doing is based on working within the evolved nature of the Equine, then the size of the particular horse is irrelevant.

Once haltered, hold the lead loosely in your open right hand, arm hanging low, thumb forward and coil the excess lead in your left hand as you walk steadily without looking back, expecting the horse will follow. The horse should follow quietly on your right side. Keep your left hand closed on the coil of lead line, but leave the right open with your fingers curled around the rope, ready to close. Leave enough slack in the lead that the horse can walk with you without any contact on the halter as long as it keeps its distance. Should the horse attempt to turn away instead of following, close your right hand on the lead firmly, but only long enough to impede the movement away, then open and relax it again the instant the horse gives back and starts following. Try not to look back. The same routine is used if the horse stops, or drops its head to try to eat. A quick closing of the right hand and the horse is blocked as it moves way, followed by the release the moment that movement is arrested. If the horse keeps stopping, then leading may be problematic and you may have to give small tugs to get it moving again, until you begin your work on the short line, which I will address next, but do not try to pull the horse along behind you, that nearly always ends badly. Again, take your time; you have all the time in the world, believe it.

If the horse reverses the problem and attempts to walk ahead of you, rather than trying to hold back 1200lbs of muscle, try this; with the lead still held loosely in the right hand, turn left, then left again, then left again, allowing the lead to brace against your open right hand if the horse hesitates to follow right away, and viola, you are back on course with the horse behind you. Each time the horse attempts to walk ahead of you, and by ahead I mean anything close to bringing its shoulder even with yours, you simply repeat the turns to the left. It may take repeating a few times, but after several of these the horse should get tired of the circles and fall into step with you. Just like catching the horse, leading cannot have a time constraint. It will take as much time as it takes and trying to rush things will be absolutely counterproductive.

So take your horse for walks to all sorts of interesting places, keeping the right hand open except to correct ‘missteps’, but remember to release the closed hand the very instant the horse gives you what you want. Closing and holding the rein or taking up the slack on it puts you in constant contact with the horse’s head and gives it the power to apply its size to fight you and this is a fight you don’t want. In time, it should seem to the horse that you have magical powers and can block it from straying from the path you have set with a sudden application of a power that vanishes before the horse’s superior strength can be brought to bear.