Observation and personal experience have taught me that one of the more common mistakes trainers make is pushing the horse too hard or for too long. I have come to believe that one of the most important things one must learn is recognizing the fact that sometimes the best thing you can do is to stop teaching, stop insisting, stop even asking anything of the horse.

This is especially true when we are working with a young horse or when introducing something very new to any horse.  The greater the departure from what the horse has already learned, the shorter in duration the lesson should be. When introducing the horse to something fundamentally new, accept any correct reaction, even a small one, praise the horse like it just won the Triple Crown, then put the horse away.

I have heard some old cowboys call similar techniques “Letting the horse soak”.

I know, it is about now that I usually start quoting one ‘Classical Master’ or another in my writing, and some of you start to glaze over about then and some even move on. So this time I will save such quotes until the end, and instead I will tell you a story of something that I experienced myself.

One day, a few years back, Orion and I were working on flying lead changes on the heads run. The medieval mounted game called ‘heads’ is sort of like pole bending, except these are 5′ tall wooden stands, spaced about 20′ apart, with heavy rubber manikin heads on top that you are supposed knock off with a weapon as you pass. In other words, I was working on having him changes leads as we wove, riding one handed, while swinging a sword. Sounds easy? Give it a try sometime.

He was struggling to understand because previously he had always been allowed to counter canter and at this time I was not helping him to understand well enough.

After a fair duration of time, not making any progress, culminating with me getting frustrated and him annoyed, I stopped and put him away.

Even though I decided to give him the next day off, he greeted me at both feeding times by pacing up and down the fence line, always stopping at the gate before starting again. I got the obvious message that he wanted to come out, but no, I was going to give him a full day off, so I fed and left.

The following day, I was again greeted by him striding up and down the fence line and ‘chesting’ the gate, so I decide to let him out of the pasture and into the area where the round pen is located. This way he could be near me while I did some research on something I had been thinking about.

I found a nice spot in the shade, pulled up one of the lawn chairs and started reading a treatise by one of the classical masters. I hadn’t been at it more than a few minutes when Orion walked up behind me and shoved the back of the chair with his head. I caught myself before falling and gently ran him off, thinking he was just being playful. I went back to my reading and a few moments after, he was back, but this time he shoved me and the chair all the way over forward and I ended up having to pick myself up, off my hands and knees.

So here is the good part…

By the time I had gotten up, he had trotted down to the lower gate, the one that leads to the grooming tack/area, and was standing there looking back over his shoulder at me. My annoyance abated and curiosity piqued, I opened the gate and he continued down to the tie rack and stood there. I decided “Okay, I can take this subtle hint,” so I brushed him quickly and tossed his saddle on him, followed by him nearly taking the bridle out of my hand grabbing for the bit.

A couple minutes later I stepped up on him in the arena, where he instantly started off toward the heads. I let him go, now intensely curious as to  what he was going to do next. He halted squarely at the start of the run, so I gathered up the reins and focused on the far end of the run.  I got as far as saying the “O” part of “okay'” when off he went with a one-step canter departure; 1, 2, 3, 4, 5, 6, heads, weaving, with a flying lead change in the middle of each one. We continued back round to the start and again he halted, and proceeded to give a loud ‘blow’, then dropped his head.

On the life of my dog, this is a true story. On his own, Orion apparently worked out what I had been so unsuccessfully trying to teach him two days earlier and he just needed to show me.

From that time on, I began to make it a point of saving the new challenges for later in the training session, and only spending a short time on it. Time and again horses trained this way have shown a clear improvement by the next time I work with them.

I believe it is absolutely vital that this “New Challenge” phase be kept short, and this is very important, even if they appear to get it right away.  “Nothing is as dangerous to the long term goal as quick success.” This quote is one of my own, which is intended as a warning not to get so excited about a horse that appears to be handling a brand new challenge easily that the rider keeps driving them forward until they start to get it wrong, turning success into failure. Sounds ridiculous, right? Who would do something like that? I see it all the time and am still tempted to do it myself sometimes. Why do you think I felt a need to come up with an affirmation? I repeat this one when I start to run the risk taking a good ride too far;  just as I repeat “The horse in an innocent victim in all this.” when a ride is not going well. There are quite a few more, but you get the idea.

Over time I have developed a guide for my training sessions, based on the horse’s currently level of training. This was intended to help me decide on how long I should work any given horse and how hard. This is just my concept of what constitutes a good session. It is not carved in stone somewhere. It is not even written in any book I have ever read. I am just putting it out as a illustration of what I try to do.

I have included a simplified graph to help illustrate what I am talking about. 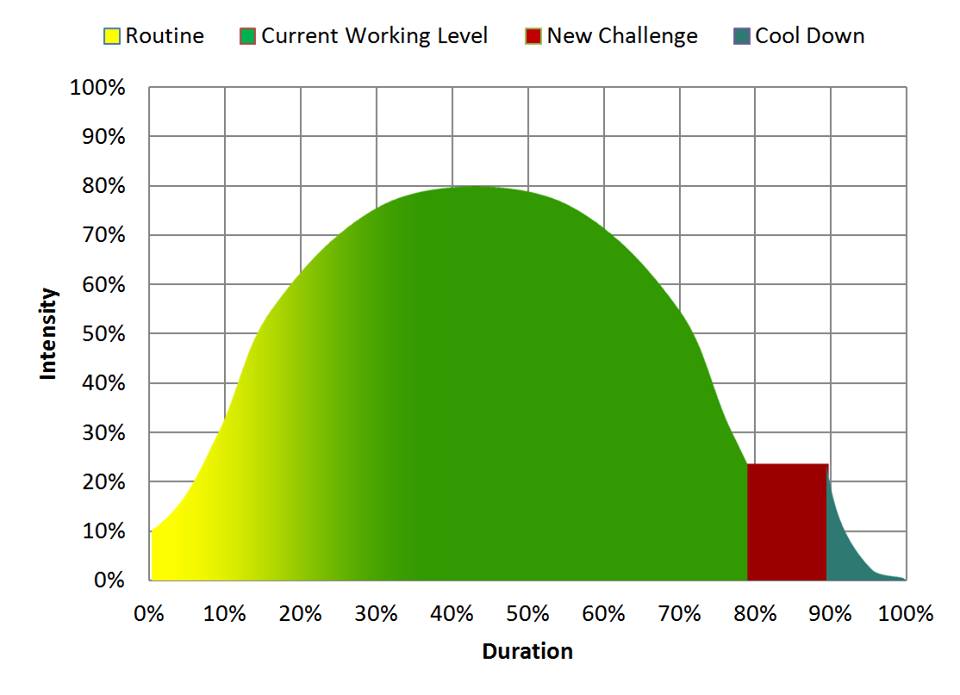 Looking at the graph you will see there are three factors involved: Training Level, Duration, and Intensity.

Intensity refers to how hard you push the horse physically.

Duration means what percentage of the total training session I suggest be spent doing what.

You will notice I make no attempt to detail what specific activities should be in any given session nor do I suggest how long a session should be. The horse’s current training and condition will be the gauge for these. The chart is merely intended as a guide as to what percentage of the overall training time should be dedicated to what level of challenge.

I suggest you start out at a low intensity as you begin the Routine work, rising little by little, before gradually working your way into activities more in line with the Working Level, where the intensity holds for a bit at a maximum of no more than 80%, then starts ramping back down pretty quickly, reaching approximately 20% before adding a short duration of New Challenge, then dropping off again during the Cool Down. Above 80% physical exertion should be reserved for competition or specifically conditioning sessions. A horse  should never be exhausted during a training session. A physically spent horse cannot be taught anything except to dread the training process, just as a mentally over taxed horses cannot learn anything save to distrust the trainer.

One more point of note: It has also been my experience that this very order of training applies just was well to the riding student, though since we assume the human would be more capable of mentally accepting the New Challenges, a slightly longer duration might well be spent in this part of the graph when it is applied to the rider.  That being said, I have found that applying this same order and duration of training to the riding student has been remarkably efficacious.

All of this is intended only as a guideline for the thinking horse person to customize to the needs of their specific horse. It was originally meant for myself and my students, but I am putting it out there for everyone else to take or leave, in part or in whole.

Now here are those quotes of the ‘Classical Masters’ I promised you.

“I have time” should be the guiding word especially of dressage riders during the entire course of training and remind him of the fact that the goal of the classical art of riding is to be attained only by the gradual increase of demands.” Colonel Alois Podhajsky (1898 – 1974)

“It is calmness, calmness and nothing else, which converts disordered jerky gaits into smooth, flowing ones. Here is one very important phase of training in which there must be no struggle. A teacher must first get the confidence of his pupil, then evince kindness, gentleness and a will that, though calm, is inflexible. This is the immutable and sovereign law of teaching, whether the pupil be man or beast.” Etienne Beudant (1863-1949)

“In training one always wants to go too fast. To arrive quickly, do not hurry, but be firmly assured of each step. The lesson should be for the horse, as for the horseman, a rewarding exercise, an instructive game which never brings fatigue. When sweat begins to show, it is because the man has gone too far. Ask often; be content with little; reward a lot. ” Faverot de Kerbrech 1837-1905

“Young horses should never return to their stall tired, since they lose their motivation to work and the tendons and joints suffer too much that way. After having asked for a more difficult, more demanding exercise, necessitating somewhat stronger aids throughout the entire exercise, the young horses must be allowed to calm down and recover by several circles in the free walk at the long rein before dismounting, which has the best influence on the health and the good will of the horse. Short, frequently repeated exercises strengthen the memory and result in fast obedience.” Borries von Oeynhausen 1852

“Bad impressions caused by hurried training methods, oftentimes cannot be erased in months. With a few days of patience, they could have been avoided altogether.” E.F.Seidler (1798-1868)